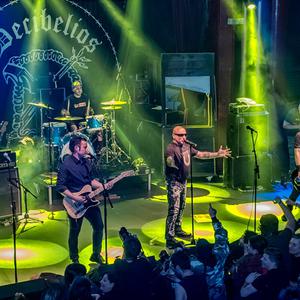 Godparents of the Latin OI

Bastard sons of Punk and adopted by the skinhead movement, after a decade of musical activism and leaving behind a collection of vinyl Decibels as a group dissolved in late 1999. But the OI spirit! The band has continued through the new generations that have kept their spirit alive. His punk and ska songs continue to sound and his lyrics have more meaning than ever. In 2014 Decibelios met again to spit out its most emblematic themes in three historical concerts in Bilbao, Madrid and Barcelona. After an Iberian tour in 2015 the brothers Alférez (bass and drums) and David Ocaña (fifth guitar of the group) decide not to continue in the group. Not so Carlos Treviño (Fray); the singer, who returned with more conviction and strength than ever with the aim of continuing to give concerts and compose new works. Fray remakes the band and with the support and accompaniment of the composer and guitar Jaume Orríls (alias Botticelli). After performing at festivals in various Latin America and the United States, the year 2018 sees the light of his new work INSURGENTS. A long-lasting vinyl with 11 songs with which they recover their purest Punk-Ska-OI essence. Currently they continue to compose and work on new musical projects and collaborations. The time and uniqueness of the group and their rock and roll skinhead music have made them a benchmark, and some of their songs and slogans are already part of the collective imagination of different sub-cultures. In this new year, the energy of Decibels will be felt more strongly than ever to celebrate 40 years since its founding in 1980. An opportunity to share music, fury and party with friends, followers and lovers of the band.

Since 1980 Decibelios is a legendary group formed in 1980 with hundreds of live concerts in their history that has taken them to various continents.

The base band is made up of five musicians: Drums, bass, guitar, sax and singer. Punctually we are accompanied by trobon, trumpet and keyboards. We are an open fruit to collaborations with other friendly bands.

Our repertoire that ranges from an hour to an hour and a half is made up of ska and street punk music.

The group has a technical and logistic rider available

The technical needs, backline and assembly are in charge of the contracting party.